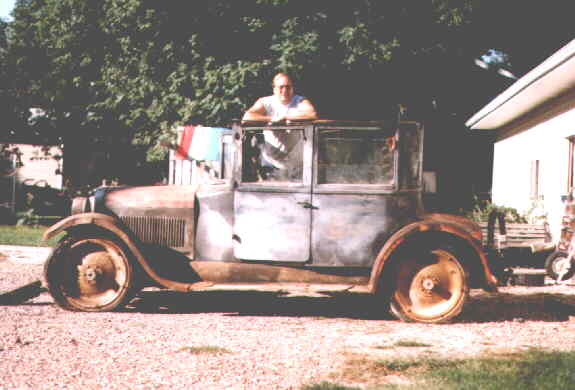 My acquiring a ‘23 Rickenbacker story starts in February of 1998, I'm looking through March's issue of Hemmings Motor News. For the last couple of years I have found myself always turning to the R section first in hopes of finding a Rickenbacker listed. (This is how I met Roland Klix, we both called on a parts car about a year earlier) There's one listed, I jumped on the Internet and looked up the phone number listed to find out where this ‘23 Opera Coupe was sitting. I quickly found out it's sitting in Bluford, Illinois, belonging to Corneluis Bergbower. I check Roland's "Hat-in-the-Ring" list and sure enough there was Corneluis. My wife and I decided to call on this one right away before it gets away, but my heart dropped when Corneluis stated it was already sold. He explained a few other guys had called too, but the car really was going to go to his son. During the process of clearing a path to the car his son spoke up and decided to buy it and restore it. I hung up, and that was that.

Then the last week of May at an old gas engine swap meet in Waukee, IA I ran across a table with a sign on it "WANTED any Rickenbacker information". I find out this is Corneluis Bergbower, and we quickly start talking Rickenbacker stuff. I asked how his son is doing with the car. He tells me it's still sitting in the same spot, and if I'm still interested come and get it. I gave him my calling card, and said talk it over with your son and give me a call. Again I figure that was that.

Then one night in mid August (Aug. 5th, 1998) I get a phone call from Corneluis; his son and him talked and a decision was made to sell the car....again. I told Corneluis this was a bad time for me with money, but come next spring would be easier for me. I told him I'd let him know if I could swing it, but for now I'd have to pass. I hung up the phone with sadness. Later that night I told my wife who had called and the latest on the ‘23 Rickenbacker. She question why we weren't at least going down to take a look? After some talking, I called Corneluis back up and set a date to go down and take a peak at this fine automobile. (Aug. 23rd, 1998)

This was a big day for me. Finally I am going to see a Rickenbacker car! I've always wanted to see one since my grandpa had a ‘25 Rickenbacker four door Brougham. All that's left of that car is a picture and memories. The picture has hung proudly on my wall for some ten year's now. He used this car during the dating of my grandma and also on their Honeymoon in 1936 to the Dakota's from eastern Iowa. He always loved to speak about the Rickenbacker car that he had, never really saying that much about it just saying he had one. I always thought it was because he liked saying the name Rickenbacker. It's sounds neat, I thought grandpa liked the way it rolled off his tongue. It's wasn't until in the last couple of years did I figure out that the Rickenbacker Car Company and Capt. Eddie Rickenbacker were the same man. Grandpa never told me this when he was alive, but I know he knew this and thought I did. No matter what was going to happen with the sale of this car, I was going to see my first Rickenbacker.

My wife, daughter, and myself spent the day before seeing the Rick in St. Louis. We spent the night close to Bluford, Ill where Corneluis lives. Up early that morning and off we went to see Corneluis and my first Rickenbacker. This car was purchased by Corneluis because of the man which he admired. See Corneluis served in the U.S. Air Force 305 Bomber Wing in the early fifties under the very capable command of General Curtis Lemay. His first job was inspecting and changing the 144 spark plugs in B-29 Bombers, which later grew into a hobby of collecting spark plugs, then publishing three books on antique spark plugs. This car was bought for the name which it stood for. A car worthy of it name, no matter what shape it was in. (rough, but complete) Corneluis stuck it in a shed with the intent to restore it someday. That was 1954!

It was a beautiful morning as we pulled into Corneluis driveway. We introduce everybody, then off we went to the back shed to meet Rick. He was buried in the back of the shed, hadn't been touched since ‘54. Climbing to the back of the shed the car slowly took shape, my wife right behind me. As the flashlights lite up the fine parts of this car we both fell in love with it. It went from seeing my first Rickenbacker to buying my first Rickenbacker.

On September 26th we returned to pull Rick out of his shed and move him to our place. Everything went really smooth. As we left that day Corneluis brought tears to my eyes. We said our goodbyes and off he went. We did a final check over and got in the truck and rolled slowly out the driveway. I turned and looked into the front yard to see Corneluis standing there, alone. He then came to attention and saluted the car, looking straight at the car, not at me in the truck. Corneluis then said "Farewell Capt. Eddie"!! Then looked at me and said "take care of him for me". I felt like I just ripped a hole in that man's heart by taking this car...no... I know I did.

In the last couple of years I've learned a lot about Rickenbacker's. I've learned things that no book could ever tell me. Between my Grandparents proudness of owning a Rickenbacker, and Cornelius patriotism, I'm learning the true meaning of owning a Rickenbacker. It's much more than owning a rare old car! There is a story behind the man who's name is on that car, and it's bigger than the car itself. The story needs to be shared, never forgotten! Today the only thing close to this is maybe Michael Jordan, most everybody ‘s heard of Michael in one way or another. From the 1920 to the 1940's that name was Eddie Rickenbacker.