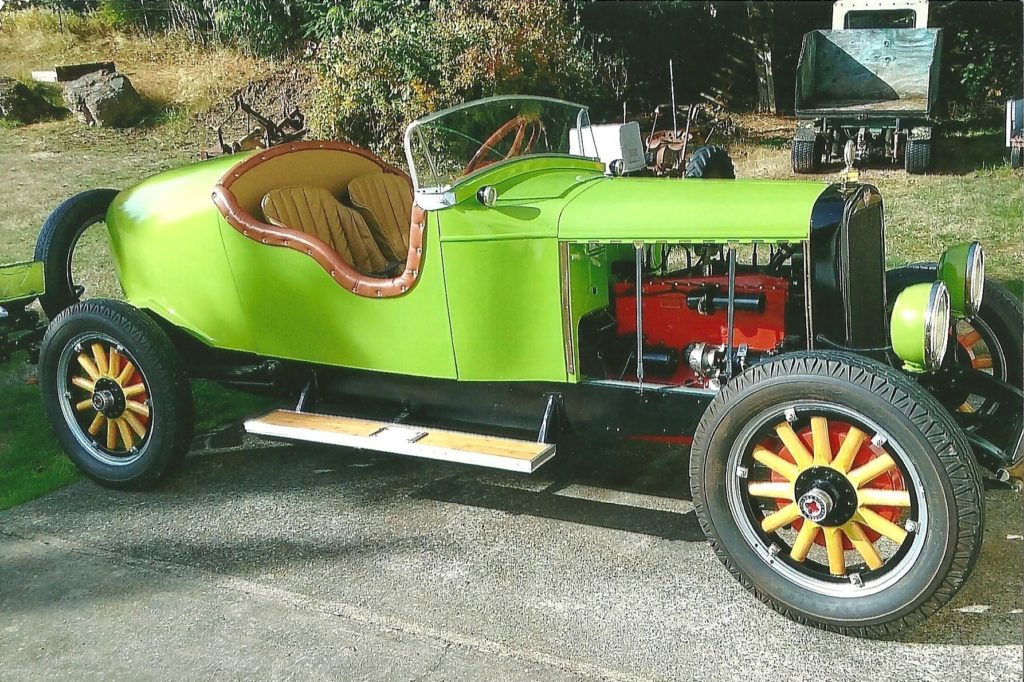 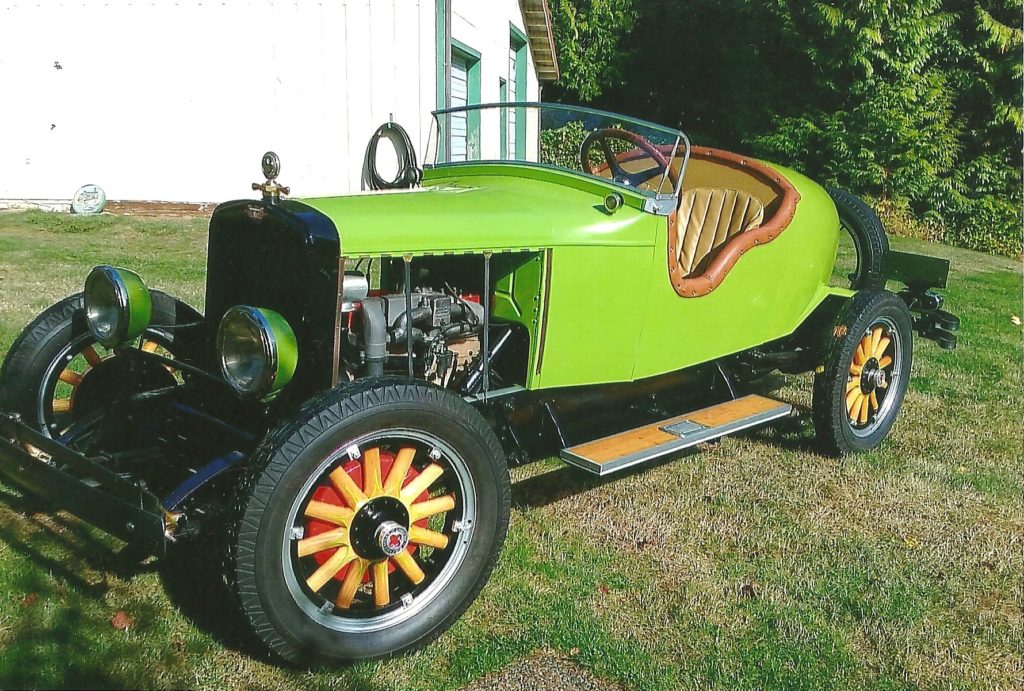 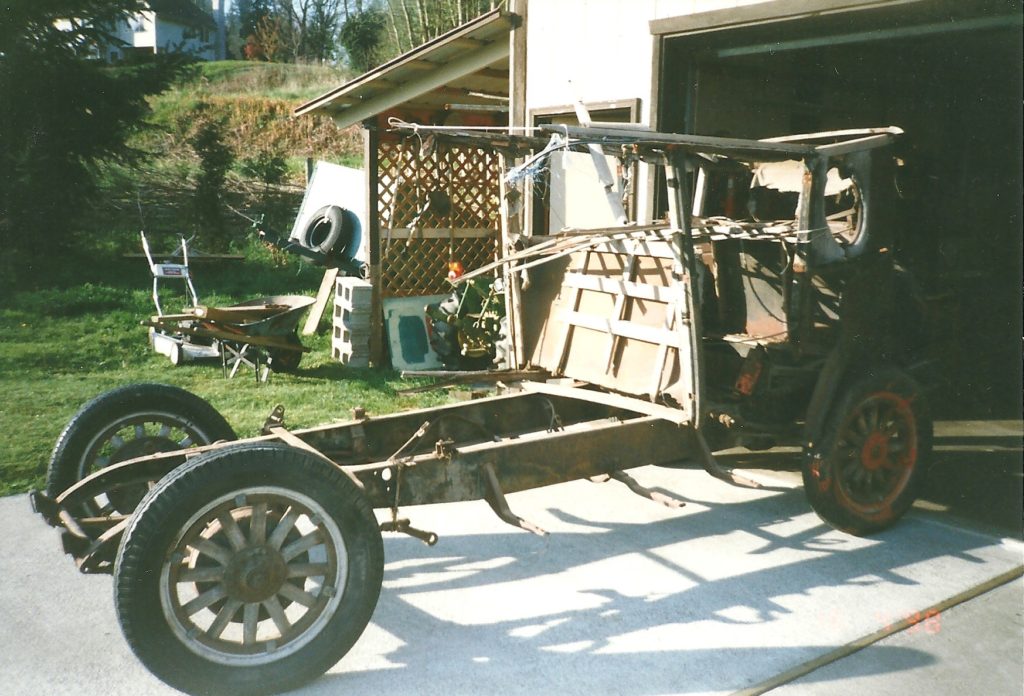 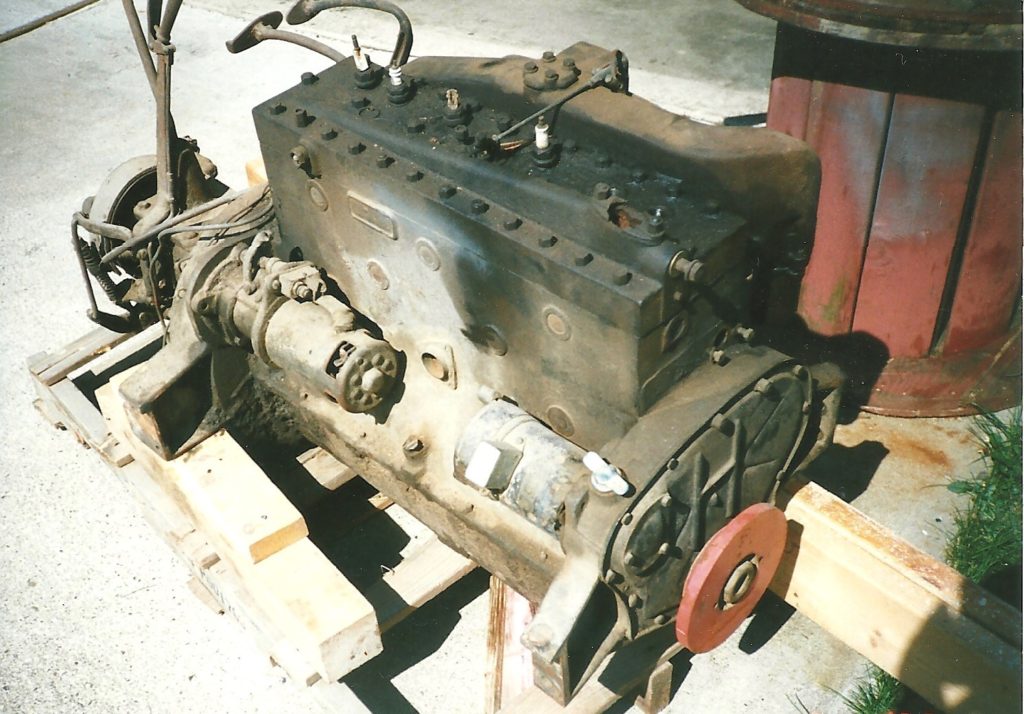 In the spring of 1998, my brother, his two girls, and I, traveled to Colorado Springs, Colorado, to pick up a 1923 Rickenbacker chassis and body parts. We loaded the parts into a rented Rider truck. Marty and his daughters drove the truck to our home in Renton, Washington. Along the way we were delayed in Wyoming by a snowstorm that closed all the interstates, and spent the day in a motel, waiting for the roads to clear.

Unloading the car, we had a pile of rusty parts, chassis, and engine components. These sat for a year while I contemplated what to do next. The emerging plan was to build an old-time speedster, since many body parts were missing. The first step was disassembly of everything to see what we really had. The chassis was sandblasted and painted. Researching the engine serial number and other features, it turned out the car was really a ’26 Brougham originally.

Working in my spare time over the years, a little each day, I rebuilt, re-fabricated the chassis and components, got new spokes made to replace the rotten wood in the wheels, and disassembled the engine and rebuilt it, except for some machine work that I could not do. I also changed the rear axle ratio and rebuilt the transmission and the starter as well. From the beginning, I had in mind of using a 12-volt system, so I decided to drive an alternator off the driveshaft. To facilitate better weight distribution for a speedster, I moved the engine and radiator 9.5” back in the chassis and fabricated a new frame cross-member for strength. I did not have a distributor, so I adapted one from a GM product and installed an electronic ignition.

The body was built on a laminated plywood platform with chicken wire, foam, and fiberglass for the rounded body contours. Lacking proper head and cowl lights, I adapted some from period correct cars, and built a new headlight bar. I did not have any dash components, and I am using modern instruments. I tried to use every Rickenbacker car part I had. Part of the dash was a re-used oak table leaf, and some rough-cut oak boards that I had and refinished. Looking Great. I made the windshield out of an aluminum rod and part of a Lexan door. All the upholstery, except the seats, was my first attempt at working with fabric. My neighbor Craig did the painting for me, and Ed did the seats, and Dan did some machine work. The wiring was a challenge, but I finally completed it, and then the speedster (roadster) got licensed and registered in 2017.

There are still items to be done and improved, but it has been a satisfying project, and it is fun to drive.

Many thanks to Craig, Ed, Dan, and everyone who helped me with this project. I will enjoy it for years to come.